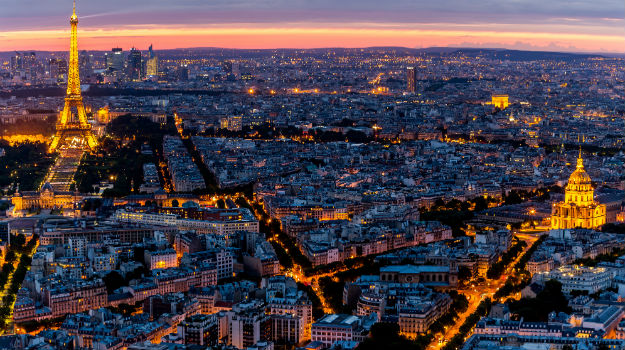 Ah Paris! The home of the beautifully fluffy croissant, some of the world’s biggest art galleries and, of course, the Eiffel Tower.

There’s plenty about the capital city which makes it the perfect destination for a romantic getaway, actually – and while it may be pricey when it comes to eating and drinking out, it doesn’t have to cost the earth to stay there.

Thankfully, too, if you’re London-based you can simply hop aboard the Eurostar and head across for a day. An ideal city for a day’s shopping or sightseeing, Paris has so much to offer. And to help you plan a romantic break with time to spare for Valentine’s Day on February 14, we’ve picked out our favourite city hotels. Read on…

The Best Western Hotel, Champs-Élysées – Just a six-minute walk from Charles de Gaulle metro station, this three-star hotel is a modern property in an elegant building. It’s in a great spot, too; just eight minutes’ walk from the gorgeous boutiques on on Avenue des Champs-Élysées and 2.3 more km from the Eiffel Tower.

Compact rooms offer contemporary décor and free WiFi, while flat-screen TVs and tea and coffee making equipment make this feel a little like home, too. Choose this hotel and you’ll be treated to a complimentary, buffet breakfast each morning as well – can’t be bad.

Leave it too late, though, and you’re unlikely to snag the best hotel deals on hotel comparison sites. Instead, try to be as organised as possible to take advantage of a great price.

Albe Hotel Saint Michel – From around £85 per night you can stay in a hotel that’s a mere six-minute stroll from the historic 14th century Cathédrale Notre-Dame de Paris. A modern choice in an ornate, Parisian-style building, this is a stone’s throw from the metro station and not too far from the Musée du Louvre.

What’s more, soundproof, air-conditioned rooms will make your stay a comfortable one, while you can enjoy a continental breakfast buffet from the relaxed dining room in the morning (at a surcharge). In terms of quality think a French Premier Inn.

Central Hotel, Paris – Just a two-minute walk from the Edgar Quintet metro station, this hotel is opposite a leafy public square – making for some really pretty photos. If you’re looking for the kind of home-from-home amenities you’d expect from a decent hotel like this, you’re in luck. Simply, cosy rooms feature flat screen TVs and free WiFi, while many of the rooms also have floor-to-ceiling windows overlooking the square.

Want to make your leisure trip to Paris extra special? Look out for some dinner deals and enjoy a cut price meal at one of the city’s best restaurants. In the meantime, ask around for recommendations and see if you can seek out discounts and vouchers ahead of your trip to make the overall cost more manageable.

There's now a quite a while until the next Valentine’s Day, isn’t it time you saved some pennies, booked a hotel deal and surprised your other half? Go on, why not?!