Both an Ultimate General Manager and Mum.

I started Peach at the Embankment on the 4th of July 2014 (I remember the day clearly because I love the film Independence Day). I was attracted to Peach because I lived in Bedford but worked in Woburn so would often visit The Embankment and The Black Horse and loved what they were doing. I was a foodie and loved a good glass of fizz

I worked for a family run fine dining restaurant previous to The Embankment. I wasn’t being challenged enough as a manager and had very little input into the business – basically a glorified waitress who cashed up and locked the pub. It was time to move on.

Peach was the perfect balance of not going to a chain, yet retaining my love for serving fresh food. I was approached by the General Manager of The Embankment as he had friends at the restaurant that I worked for and heard I was looking for a challenge. I remember my first weekend with Peach well – it was Bedford’s Bi Annual River Festival. It was amazing, £60k over two days – I was in my element and instantly loved it. Busy, fun, vibrant, quirky and outrageously hard graft.

Within the first few months I felt like I finally had a ‘proper job’. I was a 29 year old living on my own with a company email address and a job role that I was proud of and could enthuse about to my friends and family.

I had been given Peach Pounds to spend on going out for dinner, was sent on various training courses to different pubs, took day trips to meet suppliers, and lots of Peach central team came to the pub to teach me the processes.

All the Peach people that I met during my induction were so enthusiastic about Peach, serving the good stuff and about their role within the family. It made my induction super easy and more importantly fun. I knew pretty quickly that I wanted to get my skills list ticked off and climb that route to partnership.

Within the first year I just wanted to learn everything. I was like a sponge that just wanted to absorb. I was surrounded by the greatest in the trade and was given all the tools to help. I would have been a fool to not make the most of it. 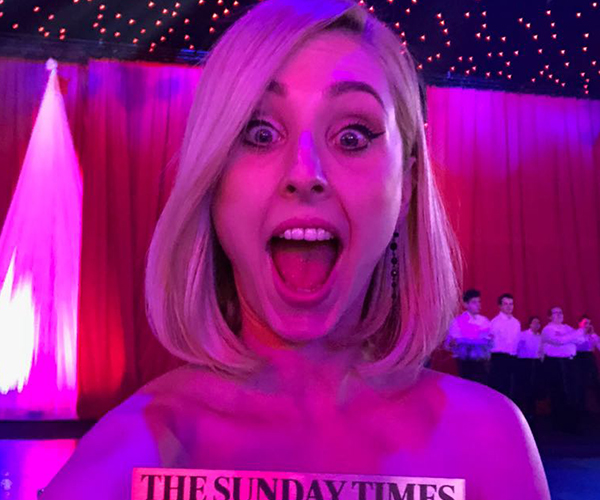 I was soon made social media champion which was amazing. I loved the creativity that I was allowed and was able to show how my work was having a positive impact on the trade at the pub.

It’s just one of the things that was so refreshing about Peach. Numbers and figures were just as equally discussed as service with Junior Managers. It made me feel inclusive of the bigger picture and, rightfully so, filtering information down made me keen to learn more but at the right pace.

During my first year I was not on any Management bonus scheme but I was often given a little something when the hard work I was doing was noticed. This was such great encouragement. I truly believe that a simple thank you every now and again is the best form of praise and Peach gives that out by the lorry load.

Year two and my Deputy Manager offer letter was signed and sealed. This year I really found my feet.  All the team around me were moving onwards and upwards and I was starting to really get a grasp of what it takes to run a great pub.  I had learnt from the best and was now starting to spread the learning love and seeing great T-team members progress onto the management ladder.

The greatest satisfaction to me comes when you see team who really do love the game as much as you do and who are just so natural at hospitality.

During my time as Deputy, late in my second year with Peach my GM moved to Pod Director, running the 3 pubs in the area, so I was asked to hold the pub as an acting GM. Wow, what an honour, I had been with Peach for nearly three years and was being trusted to run one of the biggest pubs in the family. I had constant support all the time and became natural at nurturing my gut instinct. I had been given all the tools I needed, had been on every possible training day and was learning new things about management processes everyday – mainly by trial and error – but the support was there for mistakes.

It was around this time that I also fell pregnant with the beautiful Bowie.  I did not let this affect my job in any way.  I gave more to The Embankment than ever as I felt that I now had two babies to look after.

With so much love and support from all my team members, my guests and Peach, my pregnancy was a breeze and I worked right up until three days before Bowie was born. I even encountered my second river festival during this time which was just as fun and rewarding as the first time, just a little more swollen ankles this time.

During the 8th month of my Maternity leave I was approached by Peach about my return to work and coming back as General Manager. I bit their fingers off. They were so understanding about my need to have certain days of for childcare reasons but the joy of hospitality is just that. The flexibility.

I returned to The Embankment on the 3rd of July 2017 from maternity as a mother of two – my first day back being Peachfest, our annual Team Party, so what a way to celebrate.

It was great to be back and I wasted no time in getting stuck in.  The support from Jon (our Head Chef and Father to Bowie), Peach, The Embankment team and my family has been amazing.

How many Mums of a one year old can say that they have easily returned to full time employment and still get to spend so much quality time with their sprog – evening work is the best – baby in bed, Mummy hosting her pub.

Bowie is thriving and so is The Embankment. I am so so lucky. I really do feel like the pub is my pride and joy now.  It’s doing great and from a personal point, I bloody love my job. I’m so excited about the future and what The Embankment can do and really looking forward to smashing the pants off river festival this year now I finally have the big boss say in how we do it.

I was promoted to Ultimate GM three months ago, another box ticked off on my way to partner! Being made an Ultimate really was amazing. I have worked hard, I have shed more than a few tears but I love what I do and I love even more the recognition I get from Peach.

If I look back at four years ago I would never have believed  that today I would be a 35 year old female Ultimate General Manager of a pub that takes £40k a week with a one year old, two dogs, a parrot and Jon.

Every day I set myself goals. They are now mainly not for my growth but for my teams’ growth. However my one goal for myself and my family  would be to make partner in Peach and really make what I have learnt over the four years make a big difference.